On our trip one of the first places we stopped was Pensacola. The idea was that we wanted to camp near the beach. We bought a nice truck bed tent which I will mention in another post later on. Once we got to Pensacola we found out there is no on the beach nor near the beach camping.  The only camping was for RV’s. On the beach is completely understandable as it’s for the protection of the wildlife. No tent camping near it? Seems odd! We decided to just have dinner at Crabs on the beach and head on to St. Augustine to the Casa De Suenos Bed and Breakfast. Oh and so happy we did! 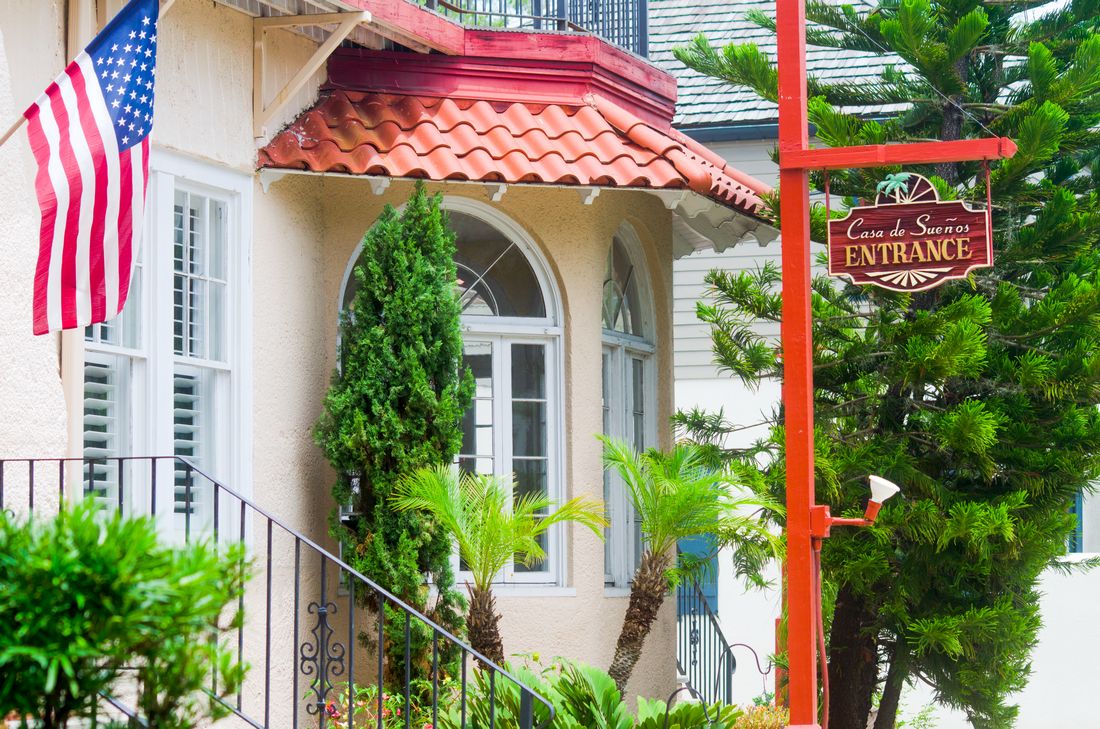 After some sleeping along the way at few rest areas, because we drove straight from Texas to Pensacola, Florida we needed sleep. Heck we really needed a nice shower! Luckily, when we showed up we were greeted by Kendra which she was so nice to let us check in a little early. She went over everything with us when we arrived along with all the free snacks and drinks available for guests. Which I have to say is fantastic! Other places we’ve been we couldn’t even access the venting machine.

Can we just pause for a second here and just enjoy this picture above? Seriously, I want to know who decorated this and can they come visit my home. I need this living room stat! Everyone that knows me knows my passion for black. This is everything. If we would have stayed longer I would have made it a point to set here and read a little each night. It’s so beautiful! 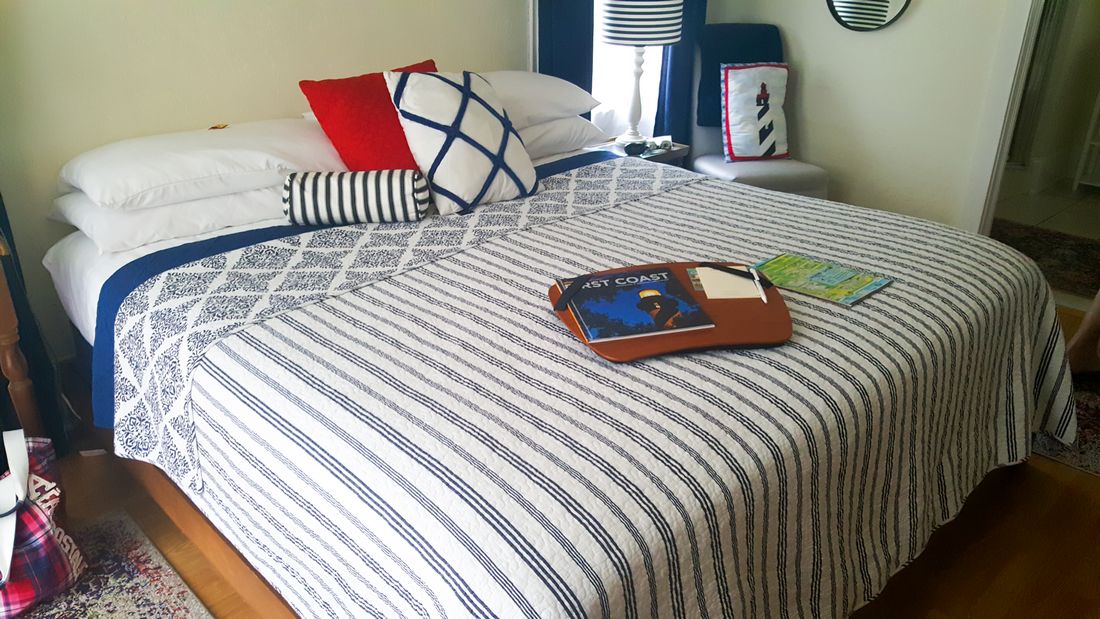 We received our keys to the room. Time for a shower! Not after taking in that this room is completely decorated in lighthouses. This was just it for me. I was in love and Vojta couldn’t stop laughing at me. If they would have let me I would have bought all the lighthouse stuff in this room. The lighthouses all reflect that of the St. Augustine lighthouse. I did bring a small lighthouse frame home from the St. Augustine Lighthouse museum plus plenty of pictures that will go on my wall.

The bed was comfortable. Bathroom featured a jetted tub along with a stand alone shower. I am not a bath tub girl I will admit that. The standalone shower is a huge hit for me. So we hopped in the shower in excitement to go visit the town. He took a nap as I go ready to go. Of course, I fiddled a bit to enjoy the room just a tad longer. 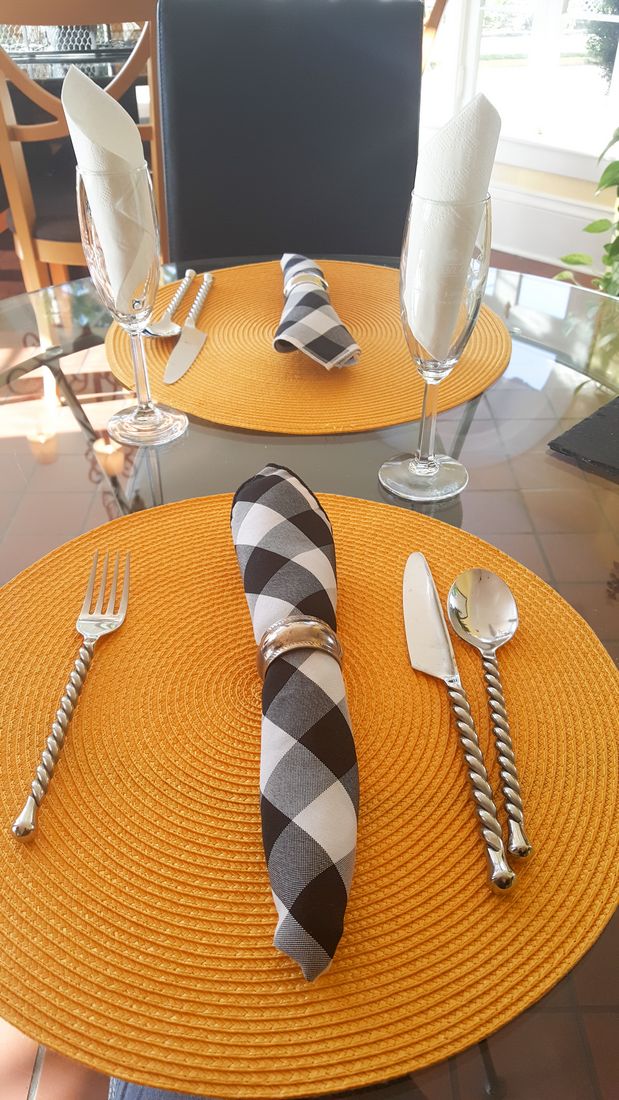 We visited the local shops, historical places, and much more. But that will all come in another post so you will have to stay tuned. After a lovely dinner the night before we came back to enjoy the room. They had DVD’s available but we were so tired we made use of the entirely too comfy bed.

The next morning we enjoyed a chef style breakfast with biscuits, gravy, eggs, and juice. This is the breakfast area pictured above. I told Vojta this is what I want when we have a house. A lovely rounded room just like this. They had the best biscuits. Breakfast changes ever single day which makes me wish I could have stayed longer. A chef prepares these meals. I am tell you these are the best biscuits I’ve had hands down. They also have a happy hour with free local beer and local wine. We missed it seeing the city but if we go back that would be a good break time before a night out for dinner. 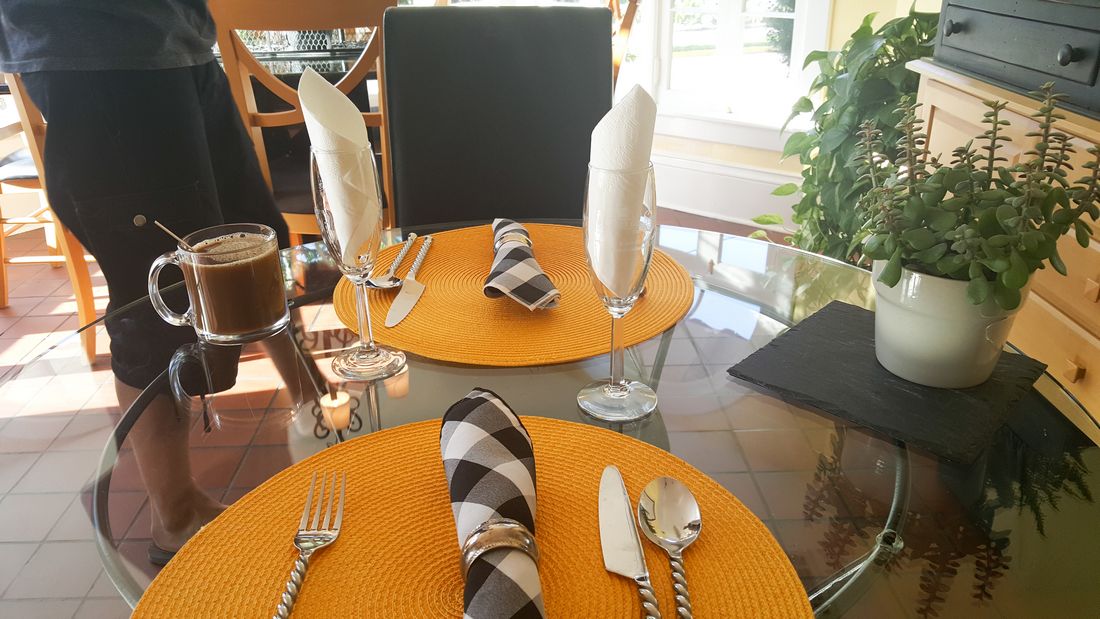 The Casa De Suenos is located just a block from the Tolomato cemetery so if your like me you can see some really cool history close by along with being located another block or so from St. George St. It’s also located close to the fort. You will need a car if your looking to visit the lighthouse or a taxi. It’s on the other side of the island near the beach. Hopefully we get a chance to go back and visit more of the shops and the rest of the history. I really hope Kendra is still there as she was a fantastic host! I can honestly say if you can stay there do it. Just remember it has a bit of history which adds to its character. Check out the history below.

Have questions about the inn? Please don’t hesitate to ask! We would love to answer any questions.

The neighborhood where the Casa de Suenos was originally built as a private residence is said to include homes once owned by some of the city’s most prestigious residents. One of the Casa building’s early residents was George A. Colee, whose family started a long-running horse carriage company in St. Augustine in the 1880s. The residence had an ambitious expansion during the early 1900s, when members of the Carcaba family called it home.

Family patriarch P.F. Carcaba, a native of Oveido, Spain, had come to St. Augustine in the late 1800s after starting and operating a successful cigar manufacturing operation in Cincinnati. He was an expert on tobacco who regularly journeyed to Cuba to buy select leaves. He produced pure Havana “Caballeros” in boxes covered with images of Henry Flagler’s hotels. The making of top grade cigars by hand reached its peak in St. Augustine during the years just after World War I. The family-operated Solla-Carcaba Cigar Factory was built around 1909 on nearby Riberia Street. This 3-story brick building was listed in the U.S. National Register of Historic Places in 1993, stands as St. Augustine’s oldest surviving major industrial building and a last remnant of the city’s cigar industry.

Prosperity enabled the Carcaba family to extensively renovate the Casa building, adding wide palladian and bay windows, red tile roofs, balconies, arched doorways, and stucco exterior. This gave the building its Mediterranean-Revival styling which is so distinctive today. The Casa building served as the Garcia Funeral Home in the mid 1900s. In the 1970s it was under the auspices of the St. Augustine Association for Retarded Citizens and was later converted to offices.

Casa de Suenos was established as an inn by owners Ray and Sandy Toole in 1998. From 2001-2015 the lovely bed and breakfast was owned and operated by Kathleen Hurley, who garnered rave reviews from her guests. Since autumn of 2015, Casa de Suenos has been one of Joe and Margaret Finnegan’s outstanding lodging properties in the St. Augustine area. For over 30 years, the Finnegans have been owner/innkeepers of nearby St. Francis Inn, just five blocks away from Casa de Suenos. Their other guest offerings include a variety of vacation accommodations at St. Augustine Beach and a harbor-side condominium at Camache Island marina, called Harbor 26.

Thank you to Barbara at FloridaHistoricCoast.com for sponsorship of this review. As always our opinions and experiences are our own.